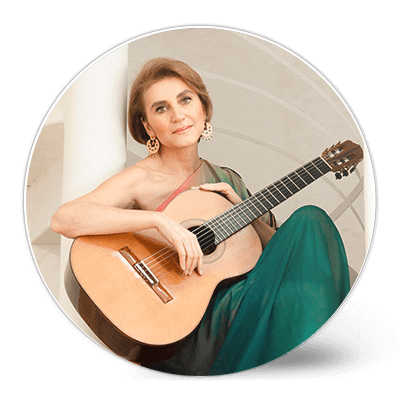 In July 21, 2018, John Williams was at the Globe Theatre in London’s Southwark Borough beside the River Thames for a concert with Paraguayan virtuoso Berta Rojas. The venue was the intimate Sam Wanamaker Playhouse, the indoor hall adjoining the open-air Globe Theatre, a replica of the venue where Shakespeare’s works were staged. Four chandeliers holding flickering candles lit the Wanamaker stage for a capacity audience of 340 seated on benches in the pit in front of the stage and in galleries at stage-level and above on either side of the stage. Every seat is close to the performers, and the hall’s acoustics are perfect for unamplified classical guitar.

In a bit of magnanimous programming, Williams opened the concert. He introduced his first numbers: three dances from Terpsichore by Michael Praetorius (1571–1621). He told the crowd that they were selected from a collection of more than 300 dances penned by the German composer who lived around the time of Queen Elizabeth I, making Praetorius also a contemporary of Shakespeare. The “Courante” and “Ballet” were notable for their stately melodies and “La Volta” for its brisk pace. All three demonstrated Williams’ ability to clearly articulate all lines in a polyphonic texture, no matter what the tempo.

He continued with Baroque-era pieces, the first being his solo guitar arrangement of Vivaldi’s Concerto for Violin Op. 3, No. 9. Williams shared that his version is an amalgamation of Vivaldi’s score and J.S. Bach’s arrangement of the piece for harpsichord. Two allegro movements bookended a lyrical and unhurried larghetto. Williams rendered the double-stops in the intro of the final allegro sweetly before launching into a contrapuntal romp that was quintessential Vivaldi. He followed with a Sarabande by Silvius Leopold Weiss and Carolan’s Farewell to Music by Irish harpist Turlough O’Carolan. Speaking of the former, Williams related the story of Weiss and Bach engaging in an improvisation contest, and that the lute music of Bach’s competitor was a likely inspiration for his own lute works.

Williams’ final segment included three Venezuelan pieces that were inspired in the 1930s after Agustín Barrios Mangoré played three weeks of sold-out concerts in Venezuela. Williams took Antonio Lauro’s evergreen Natalia at a quick tempo, and followed it with Como llora una Estrella, which he said was a popular song arranged by his late mentor Alirio Díaz. He closed his set with the brief and energetic El Totumo de Guarenas by Benito Canónico, eliciting tumultuous applause.

Rojas is a champion of South American music, and especially that of her countryman, Barrios. Williams had invited her to play an all-Barrios program for her part of the concert, and she truly delivered. She opened with Un Sueño en la Floresta, which begins with a serene melody with chordal accompaniment and transitions to tremolo for the majority of the piece. Her tremolo was both rapid and loud, standing out easily above the middle voices that she played warmly.

Jha, Che Valle is a work based on a rhythm of the Guaraní, a group of indigenous people found throughout South America, and well represented in Paraguay today. Rojas nimbly navigated the work’s scalar passages and double-stops that at times were reminiscent of “Chop Sticks.” In the gently rocking Julia Florida (Barcarola), Rojas understated the bass notes as she played the yearning melody molto espressivo above. In the popular Vals Op. 8, No. 4, she handled the arpeggio and scalar passages with bravura.

During a tuning pause, she told the crowd that Barrios had once played in London as his alter ego, “Nitsuga Mangore,” wearing native costume. She then took the upbeat Maxixe, with its folkloric rhythm, circle-of-fifths chord progression, and fleet-fingered linear arpeggios, at an ambitious tempo. She closed with the tripartite La Catedral, including the “Prelude” (subtitled “Saudade”), which Rojas stated was written in Cuba in 1939, years after the “Andante Religioso” and “Allegro Solemne” movements were complete. The final allegro is a rigorous arpeggio workout, and Rojas took it at a good clip, prompting an eruption of applause from the audience.

After Rojas took her bows, the stage door opened and a second chair and music stands were brought out for an encore with Williams. Before the duo began, she voiced heartfelt thanks to Williams for bringing the music of Barrios out of obscurity with his groundbreaking 1977 album Barrios. The duo then played a joyful version of Danza Paraguaya, trading melody and accompaniment, nodding and smiling throughout. The audience responded with a prolonged standing ovation.

At an after-reception, Rojas was surrounded by Paraguayan friends who turned out for her milestone concert. Among them were the Paraguayan consul, filmmaker Marcelo Martinessi (who produced Paraguay According to Agustín Barrios, which showcases the playing of Rojas), as well as former students and others. Williams was also encircled by friends and fans. He stated that the only gigs he plays since retiring are for the guitar series he curates at the Wanamaker. This was an unforgettable evening of music, showing Rojas in top form and Williams playing as authoritatively as ever.